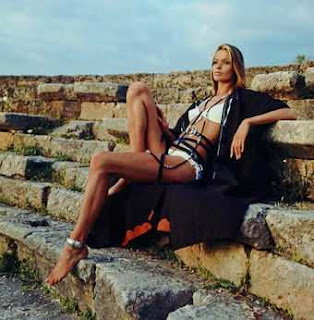 When we interviewed Orlando Pita backstage at the Diane Von Furstenberg show, he said Veruschka was his inspiration for the long flowing locks, which he said were “very Bohemian, very natural, fresh, clean and windblown as if she were in the desert.” We played along as if we had every idea what or who Veruschka was.

The second we got home, we checked it out on Wikipedia, to remedy our ignorance. For those who are as clueless as JSG, according to the internet’s encyclopedia, Veruschka was a top model in the 60s and 70s, a favorite of photographer’s Irving Penn, Peter Beard, Francesco Scavullo and Richard Avedon. She was born in Prussia and her father was executed for trying to assassinate Hitler. And judging by the photo, her gorgeousness is worthy of inspiring fashion forty years down the line!

By the time we got to the Milly show and Kevin Ryan said Veruschka was his muse for the hair, we instantly got the reference. Who says fashion and education don’t mix?

Here’s your chance to travel like the stars—or at least with their baggage. Celebrities including…

Bachelorette Party Ideas #2: Where the Boys Are

Thanks to Southwest Airlines and Match.com for doing the work for us and for polling…

Balance is important in all aspects of life and that includes diet, fitness and beauty….

Get Anna Faris’s Hair from the People’s Choice Awards

We love to see a fellow new mom rocking it out on the red carpet….

A Peek Inside MakeupBag’s Carry On

One of the first bloggers we met was Erika from Makeup Bag. Ever since, she…

Replacing Items in the Minibar Unethical?

Although simply put, they are just scents, fragrances have distinct personalities and just like best…

We’ve wanted to go to Nantucket ever since Wings and the adorable Tim Daly. Now…