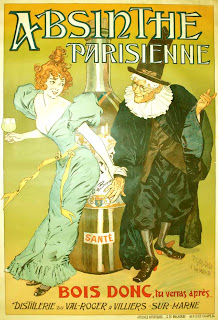 No–we’re not talking about Leprechauns. As it’s St. Paddy’s Day, we decided it was a good time to investigate Absinthe, otherwise known as the Green Fairy. It’s definitely having a comeback, now that you can once again buy it in the states: Madonna recently served it at her post-Oscar’s bash, which was rumoured to be one for the record books, and Page 6 reported last week that Anne Hathaway was spotted buying it.

The green, licorice flavored spirit has had a bad wrap of being a hallucinogenic. Scientists say that’s debatable, but hey, we’re not here to ruin anyone’s buzz. Instead, we’ll focus on the funny stories surrounding it:

One of our favorite writers, Ernest Hemingway, created a cocktail called “Death in the Afternoon” with Absinthe. His directions (courtesy of Wikipedia): “Pour one jigger absinthe into a Champagne glass. Add iced Champagne until it attains the proper opalescent milkiness. Drink three to five of these slowly.” We’re pretty sure that would do us in!

Not sure how to drink it? We got a kick out of this tutorial on YouTube. Dig the funky background music and the narrator’s French accent.

Now, we think we did imbibe absinthe ourselves a few years back. Our friend Robyn brought back a few bottles from Prague and threw an Absinthe party. We can’t quite remember the details, but she says she mixed it with sugar, shot it, then “Our friend S did a face plant and I made out with anyone who would have me, including a plant.” Hmmm…maybe it’s best our memory is foggy!

Interested in trying it yourself? Head to your local liquor store or buy online here.

Not sure where to go with the girls this Thursday night? Check out Deluxe Experiences,…

Botkier for Target is Here!

Back in March we told you that Botkier was doing a bargain-priced line for Target….

All work and no play makes for a disappointing getaway. But if you must bring…

On Our Radar: Kimpton on Jetsetter

Kimpton is featured on Jetsetter.com this week with great deals on its hotels in New…

Get the Hair and Makeup Look from Mara Hoffman Swim

One of the highlights of Miami Swim was the MaraHoffman collection, which, “celebrates life and…

Pauline Frommer shared her top travel trends—some good, some bad—for the coming year. What can…