When we saw Taylor Swift on the cover of Allure, JSG gave an inward groan. Sure, she has great hair, but is the teen pop singer worthy of the cover of our favorite magazine? We probably would have skipped reading the interview with her entirely if it weren’t for Chelsea Handler. Chelsea is the hilar host of E!’s Chelsea Lately and the author of two of our most treasured books. We want to be Chelsea when we grow up. So when Chelsea gave Taylor Swift her “Chelsea’s blessing” and warned Taylor to be careful of BFF Miley Cyrus (Chelsea said Miley is the type of friend who would tell her to cut all her hair off and dye it black. We don’t doubt it.), we listened.

Once we gave Taylor a chance and read her Allure profile, we found we really liked her. She’s polite (she said thank you 25 times during the interview); plucky (at the age of 11 she was knocking on the doors of Nashville’s music producers), self-deprecating (she talks about being the oddball in school) and–we’ll give it to her–talented (she writes her own music and plays guitar). So while you still won’t find “Love Story” on our iPod (we’re still a decade too old for it), we now look forward to seeing her on the red carpet at award shows and seeing how her career develops. 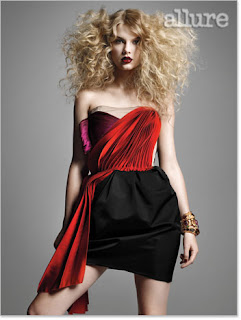 Now on to that drool-worthy hair. Serge Normant styled it–he’s also the hair genius behind Julia Roberts’ recent Allure cover. According to the mag, Serge gave her trademark natural ringlets a rougher look by applying volumizer on the roots and a silicone smoothing serum throughout the hair. He used a curling iron to create random spirals throughout, then separated the curls with his fingers. “I wanted it to look loose and lived-in, like second day hair.” For a behind the scenes look at the shoot, checkout Allure.com. 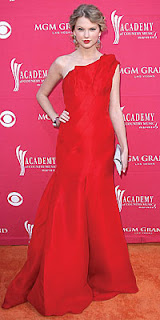 Taylor wowed last night at the Academy of Country Music Awards in a red one-shouldered Angel Sanchez gown where she won album of the year for Fearless. Congrats, Taylor!

Whether you’re road tripping this summer or hopping on a jet, don’t leave home without…

The Eloise Store at the Plaza

Attention all Eloise fans: The Eloise store is now open for business at The Plaza…

On Our Radar: Tribeca Grand Hotel

For Annie’s upcoming nuptials, most of the out of town guests will be staying in…

Mixing up a batch of Cosmos before heading to the SATC2 opening tonight? Try a…

One of the greatest inventions for road trips to a new state or for those,…

How to Avoid Static Hair