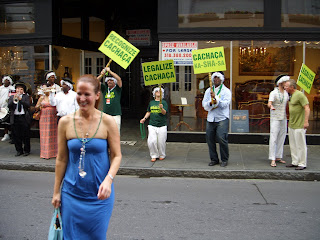 Well, we survived our first Tales of the Cocktail in New Orleans–just barely! Now we understand why no one was able to tells us more about the event ahead of time than “It’s FUN!”. Everyone is too drunk to remember anything else!

We hit the ground running on Friday and attended our first seminar “The World’s Biggest Bar Crawl” and drank our first cocktail, a Bloody Caesar, before we even checked into our room. As they served four very stiff cocktails throughout the seminar, we were pretty tipsy, pretty quickly. These bartenders–pardon us, mixologists, as we’ve learned they like to be called–sure like their drinks strong. The guides, Angus Winchester and Simon Ford, took us on a low-tech slide show tour of cool, hip and/or unusual bars around the world. We’ll recap the seminar separately.

From there it was on to the Swag Suite. Usually we don’t like to brag about what products we get for free, but this is one of the best swag rooms we’ve ever seen. Too bad we couldn’t check all those airplane-sized bottles of booze in our luggage. We gave our stash to our grateful cousin who lives in the area. 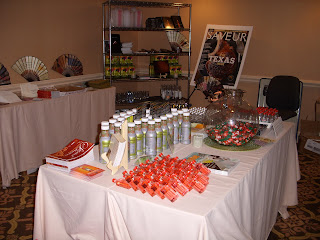 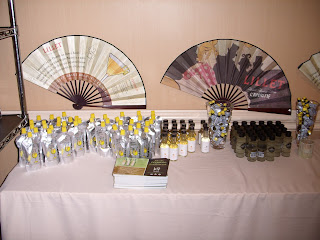 Saturday, we hit the History of Cocktails seminar. We left after a 30-minute diatribe on the creation of the Gin Rickey. That was far too much on one drink for a casual cocktail enthusiast, like ourselves. To the speakers’ credit, everyone around us sure seemed interested and were even asking questions. We did hear great reviews from our new friends who went to Hollywood Cocktails, which featured a Marilyn Monroe impersonator, and Carnivorous Cocktails.

Next, we stumbled upon a St. Germaine tasting in the lobby of the Hotel Monteleone, headquarters of the whole shebang. St. Germaine, sauvignon blanc and fruit makes a killer sangria, by the way. Then, we went to a pre-party at the Don Q Rum suite. They demonstrated how liquid nitrogen makes for a dramatic and smooth daiquiri. 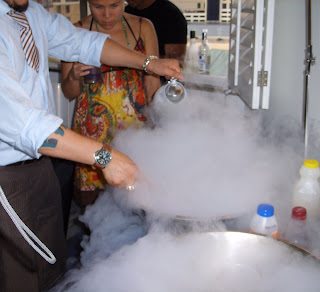 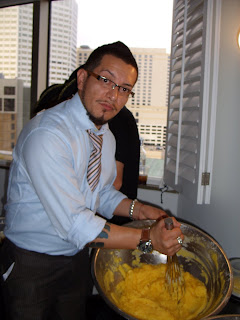 After, we headed to the 7 Deadly Sins party at the W, where each cocktail was inspired by a deadly sin. The only cocktail we truly remember was the Firefly Vodka Arnold Palmer made of tea flavored vodka with lemonade. It’s good stuff! Other than that, we did wake up with some Pop Rocks in our purse, which must have made for one heck of a cocktail. 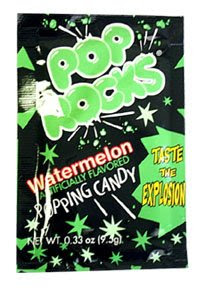 Later that night after dinner, we joined our new pals and crashed the Plymouth Gin Bartender’s Breakfast. That’s Annie in the green hat, below. Not much else to say, except Tales of the Cocktail is fun! 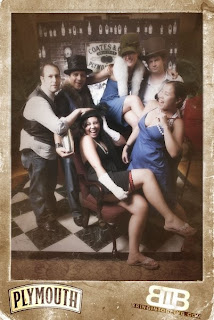 Interested in going next year? The entire event is open to the public, including many of the parties. You do need tickets to get into all of the seminars and the parties. There are also many impromptu events, like the Legalize Cachaca protest. We heard a rumor the Fine Living Network may be hosting next year, so it promises to get bigger and crazier! Reserve your room at the Hotel Monteleone early!

Make Up For Ever Lab Shine

If you haven’t already, it’s time to get familiar with Make Up For Ever- the…

The countdown is on to the November 22 opening day of The Hunger Games: Catching…

No bachelorette party is complete without a rocking playlist to set the mood. Play these…

Hudson Hall at the Hudson Hotel

Last week, we had the pleasure of dining at Hudson Hall in the revamped Hudson…

On Our Radar: Spa Week

Our favorite week of the year is here–Spa Week–along with its $50 treatments. Not sure…

An Update on Plastiki

Sea Island, Georgia makes the perfect bachelorette getaway if your gang is more interested in…

Who knew the Margarita was named after a real life woman? Texan socialite, Margarita Sames,…