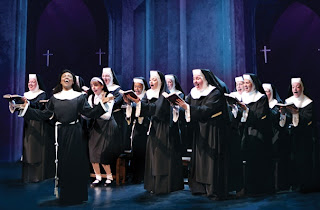 As I walked into the theater last night for Sister Act, I spotted more than a few men and women of the cloth, which immediately made me nervous. As a lapsed Catholic, I have a guilty conscience that has followed me into adulthood. Moreover, could I possibly like the same show as priests and nuns? The answer is a happy yes—though I’m just assuming by the rousing standing ovation the show got that the priests and nuns enjoyed the show, too. I think it’s a safe bet.

Sister Act was turned into a musical by the original movie’s star, Whoopi Goldberg, who is producing the show. She brought in veteran composer Alan Menken to write the songs, which have a 70s, Motown feel. The plot of the musical is similar to that of the movie, Dolores, an aspiring lounge singer, has to hide out in a convent after witnessing her thug boyfriend kill someone. She quickly turns the tone deaf choir of nuns into a must-see, money-making act for the church. The results are charming, toe-tapping fun.

One thing that really struck me is that after seeing shows with a giant Manolo Blahnik, helicopters that land on stage and sinking ships, the set of Sister Act is disarmingly simple. The showiest part is a stained glass window and over-sized Madonna (the Virgin Mary, not the singer). It was refreshing that the show wowed on its plot, songs and dance numbers alone.

It has been a while since I’ve seen the movie—it came out in 1992, so it’s safe to say it was nearly 20 years ago—but I do think a touch of the original charm was lost in the transfer to Broadway. I get that it’s a challenge to develop characters in a musical, but some of the depth of the friendships was lost from the movie. In addition, Kathy Najimy stole the show in the movie as sister Mary Patrick, a character who barely makes an impression here. On the other hand, sister Mary Robert in the musical, Marla Mindelle, is adorable with a killer voice.

My tickets were courtesy of Swarovski. I started to fret in Act I that I would have nothing to write about when it comes to sparkly costumes. But rest assured, they’re there—I don’t want to spoil the surprise.

All in all, I give Sister Act a hearty thumbs up. We left the theater with a smile on our face, humming the final show stopping number. And really, what more do you need from a musical?

Around the world, women of all ethnicities are increasingly concerned with evening out their skin…

Get Lupita Nyong’o’s Look from the Oscars

The Oscar’s were pretty predictable last night-Ellen was a funny host, Matthew McConaughey won for…

We’ve been using M·A·C’snew Colour Crafted collection and we really love it. It contains Mineralize…

Use your bachelorette party as an excuse to ogle hot, sporty guys in Colorado. The…

Do the Walk of Shame in Style

Because we’ve all been there and done that, but don’t want to get caught in…

Beyond the White Shirt

We’re sure you’ve heard all about The Gap’s white shirts from various designers Philip Lim,…

We saw Twilight this weekend and thought it was fun, especially since the theater was…

In the past three months, we’ve heard of more friends traveling to Portland than in…