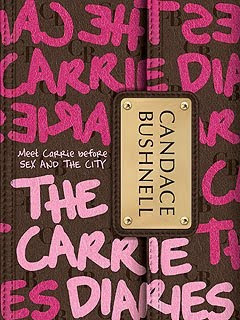 Don’t judge me, but I’ve been on a kick of reading high school literature of late. First there was Gossip Girl, then Twilight, next the Vampire Diaries and, most recently, The Carrie Diaries

. The book focuses on Carrie as a high school senior.

Carrie is more down to earth than the crew from Gossip Girl, wearing vintage white GoGo boots on her first day of school with nary a fret about a designer label (the book is set in the 80s, before teenagers–even fictional ones–regularly wore couture). Her friends drink at parties and the local dive bar and some of the characters smoke pot, all pretty normal stuff for senior year of high school.

Turns out Carrie was a born feminist and incredibly self-aware, especially as a 17-year old. She had the same relationship with her looks as she did throughout the show, meaning she knows she is cute, but not model-material, which occasionally leads to self-doubt. I am envious of Candace Bushnell, who based the Sex and the City columns for The Observer on her real life, who now has the opportunity to go back an re-write her high school years as fiction. As someone who recently read and cringed her entire way through her diary from 8th grade, that would be a dream come true.

As for the plot of the Carrie Diaries, it’s a pretty predictable tale of boys, familial angst and discovering one’s passion in life. Carrie’s is writing, of course, and she longs to get into the New School’s summer writing program all throughout her senior year. She mentions the New School so much, I started to wonder if Candace Bushnell is getting kick backs. (I’m guessing she, or someone she or her editor loves, works there.) Seriously, she doesn’t stress about getting into Brown and doesn’t even mention a particular safety school, but when it comes to the summer program at the New School, it’s like it’s the last life boat on the Titanic.

I kept longing for one of the characters to make a cameo: Charlotte, Stanford, anyone! One finally does at the end and a sequel is reportedly in the works. My advice: Check it out from the library or wait until it’s available in paperback!

Back in the day, I used to collect “Do Not Disturb” signs, now, post-kids I…

I’m not really a perfume person to begin with, so for me to smell a…

To say we’re fans of La Mer’s eye cream is an understatement. We’ve used it…

We stopped by the Rachel Roy pop up store tonight at 111 Spring Street, and…

On Our Radar: Sex and the City Mexican Vacations

Ever since we found out that the fab resort from SATC doesn’t actually exist, we’ve…

We haven’t hit mid-summer yet; but if you’re like us, you’ve already spent enough time…