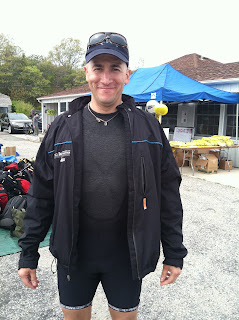 When my hubby decided to ride his bicycle out 100 miles from Babylon, New York to Montauk for the Montauk Century, it was the perfect excuse to take a road trip. Someone needed to drive our bags out after all and I’m not up to cycling 100 miles in one day. (That’s him above, right after crossing the finish line. Go, Leo!) We used the trip as the opportunity to test drive the 2011 Lincoln MKX Crossover SUV. We went big because we knew we needed a big car to get his bicycle home in. 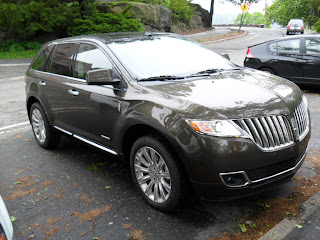 One of the first questions a friend of mine asked when I told her that’s what we drove was if I was intimidated to drive such a big car. And the answer is an even bigger N-O. The car has so many safety features including small lights on the side view mirrors that light up when another car is nearby and it’s not safe to change lanes, blinking lights on your dashboard if you get too close to the car in front of you (not that I did that), as well as an automatic display of what’s behind you as you reverse (below). 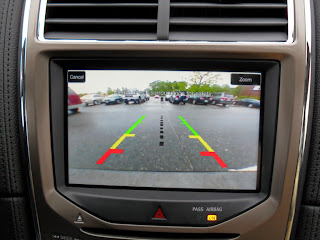 In addition to all the safety features, I loved the built in GPS which displays on the same screen as when you reverse AND on your dashboard. I found it much easier to follow directions when they were right in front of me (lower right). 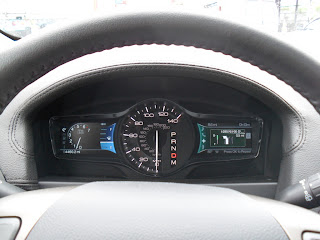 The trip to Montauk, for me at least, if not my husband on his bicycle, was one of the easiest and most enjoyable in my life. I’m sure it was partly because it was early on a Sunday and there was no traffic, but the Lincoln MKX had a lot to do with it. The seats are super-comfy and have heating and cooling options, I could relax knowing I wouldn’t get lost with the easy-to-follow GPS and the HD stereo had a jack from my iPhone cord so I could easily listen to my tunes (it charges your phone, too!). It was the first time I can remember that MORE time had actually passed than I thought while driving.

Other factors I loved about the Lincoln MKX are:

The car had a nice pick up—when you stepped on the gas it actually goes. All in all, I heartily recommend the Lincoln MKX.

butter LONDON: Get Your Nails Done Now at Dulles

We leave tomorrow for a short trip to Charleston, S.C. at the urging of a…

On our Radar – Celebrity Solstice

Today we’re off to sunny Ft. Lauderdale to set sail on the new Celebrity Solstice…

United and U.S. Airways are the latest two airlines charging $15 to check a bag,…

3floz.com: The Place for Your Travel Essentials

When 3floz.com followed us on Twitter it took a week or so before we checked…

As a fair-skinned lady of Irish descent, I definitely deal with my fair share of…

If you ever get invited to a Playboy-sponsored party, we have one word for you:…

What to Wear for New Year’s Eve

Sequins and metallic may have no better event to shine than New Year’s Eve. Here…

On Our Radar: Las Vegas