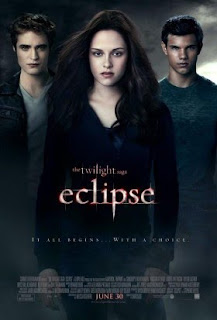 The Twilight Saga’s third installment, Eclipse, was released yesterday and to my surprise this was the best one yet.  I can’t say how it compared to the book since I could only wallow through the first two; but a few things surprised me.  First the acting was better:  the central three-Bella, Edward and Jake (Kristen Stewart, Robert Pattinson, and Taylor Lautner) were more relaxed, their lines didn’t seem forced and they were actually funny, like when Edward asked Bella if Jacob owns a shirt. Second, Eclipse wasn’t nearly as depressing as the last movie, New Moon. You may remember that Bella went into a depression which we all suffered through on screen.  Lastly, there was more action and slightly less dialogue than the first two, and even the romance seemed more believable. And, since we’re all adults here, I’ll let you know there’s one nighttime scene in a tent that was practically titillating in a three-some kind of way.  Things that weren’t impressive: the vampire makeup is still wrong (too chalky and flat) and the new vampires act more like zombies than blood suckers.

So here’s the low down:  see Eclipse if you read the books, how a tweenie twihard like me, like to see young men with the shirts off, or are obsessed with Vampires like everyone else right now.  Don’t see it if you hate teenage melodrama or otherwise don’t have patience for love triangles.  Still on the fence?  Check out the trailer below:

The countdown is on to Sunday’s 3rd season premier of Downton Abbey! We can’t…

The End of Airlines as We Know ‘em?

The news that the long-anticipated Delta-Northwest Airlines merger was approved has us a little nervous….

Tim Gunn’s Advice for What to Wear on a Plane

“When dressing for an airplane trip, one should be mindful of the duration and the…

Looking for some late-night life? (NYMag) The Trilby at the Cooper Square Hotel pictured above….

Earlier this week, we featured our dream shoes to go along with our dream vacation….

We’re always on the lookout for chic and effortless ways to style our hair, particularly…

Can you believe it’s May? Neither can we. Especially because that means Memorial Day Weekend…

Wolverine: The Best Date Movie Ever

X-Men Origins: Wolverine opened this weekend and we were on the fence about seeing it;…