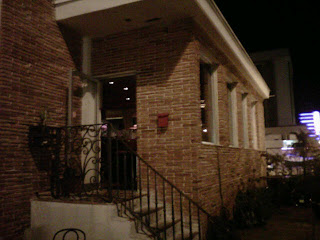 After a few nights in South Beach we were eager to get out and try something that wasn’t designed exclusively for the travel set and Red Light Little River did not disappoint. It focuses on seafood with a southern influence. Chef Kris Wessel is a New Orleans native which shows up in many of his dishes.

This blink and you’ll miss it restaurant is located at the far end of a funky motel in the MiMo District.  Truthfully, we did pass it by and had to flip a U-turn in front of the girly bar next door.  Though the area is a bit sketchy, we’re told it’s light years better than it was before Red Light moved in.  The retro diner set up and the house dj made it the perfect Sunday night wind down.

Our favorites were the fish dip (common in Miami and excellent here), the bbq Shrimp which wasn’t sweet but more tangy and buttery, the Haitian style oxtail with cheddar grits and collards (lick the plate delicious), and the mixed berry cobler.  The prices were amazingly low:  appetizers were under ten dollars and main courses were under twenty dollars. Since our dinner was less than a round of drinks at Setai, it literally pays to leave South Beach and the bonus was the fantastic food at Red Light.  Our friends, Abby and Amanda with Hope, looking happy afterwards: 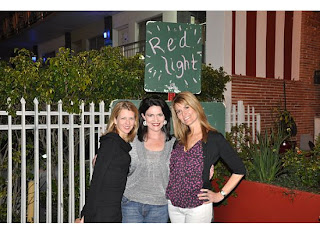 Thanks to the Target-To-Go stores, we were able to score dresses from the Rodarte line…

Juicy Couture to Take Over Airports

Just in time for the U.S. Open, Maria Sharapova was at Rockefeller Center on Thursday…

I’ve only had one bikini wax before braving the full Brazilian; but I’d heard so…

On Our Radar: Vdara Las Vegas

This time last year, we were in Vegas celebrating Anne’s bachelorette party and since then,…