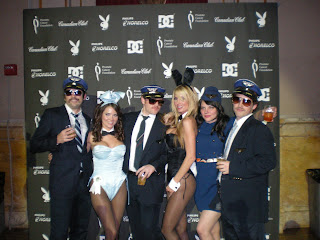 If you ever get invited to a Playboy-sponsored party, we have one word for you: GO! Last night we went to NYC’s Capitale for the Movember Gala. What is Movember, you ask? According to Movember website, it’s a global charity event that invites men to grow moustaches to help raise funds and awareness for prostate cancer. The party was sponsored by Playboy, Canadian Club and Norelco razors.

We’ve been to many a party and have on occasion been called jaded, but this was one for the record books. It had the key element that is the success to the handful of legendary parties we’ve ever been to: A fun crowd! It helped that it was a costume party–everyone was dressed up as their favorite mustachioed hero, from Sherlock Holmes to 70s airline pilots to Ron Burgundy to Jim Dangle. The women went as their favorite 70s and 80s icons, think lots of Madonnas in her Boy Toy phase and aerobic instructors. (JSG heard about the party at the last minute and did not know it was a costume party.) Ghandi was the big winner of the night–he won two tickets to the Playboy Mansion–lucky dog! 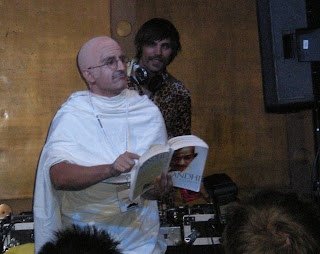 Just how good was the party? We went all on our lonesome because it was on our way home from dinner and planned to stay for 15 minutes. Four hours later we stumbled into a taxi!

If you do make it to a Playboy party, some advice: Start swiping your Playboy gear early. People were taking bunny shaped pillows, curtains and votives with the Playboy silhouette on them (one of these curiously landed in JSG’s clutch). One of the many new friends we made last night who used to work at Playboy told us this free for all is par for the course at a Playboy party and they just turn a blind eye.

Editor’s Note: Read the Washington Post’s A Look That Seems to Be Growing on Us … The Mustache is back! from November 25th, 2008.

She’s experimented with 24K gold before, now Essie is using diamond dust in her polishes…

With so many parties going on this time of year, how do you make your…

Sport’s Illustrated chose Apalachicola, Florida as the site of one of its photo shoots for…

Low Trash Month: 5 Surprising Things that Are Not Easily Recycled

Along the way, I’ve learned many things are not recycled that I thought were….

American Airlines No Longer on Orbitz

We’ve all got our go-to search engine for booking airline tickets: Travelocity, Orbitz, Expedia and…

Every year, in addition to our resolutions about living a healthier lifestyle, we like to…

What to Do if Your Flight Is Canceled

With all the snow this past month, we’re sure you know someone who had a…

Here’s a festive cocktail from the JSG archives…. Since tonight is all about welcoming the…