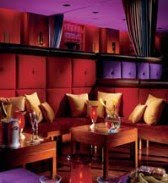 We took a stroll down memory lane as we read the hilarious “Security Breach” in the August issue of W. It’s a primer of proper bodyguard etiquette and includes these tips:
1. Be important
2. Your bodyguard is not your friend.
3. Mind your manners
4. Know the dress code.

JSG has one more to add: Don’t be too stringent about who can talk to you or you’ll end up dancing alone.

We learned this the hard way a few years back at Light in Vegas. We were there for a friend’s bachelorette and a bunch of us got a table, which came complete with our own security guard. Right off the bat, we were breaking W’s rule #1–a $500 of Grey Goose Vodka does not an important person make.

The night started off well enough–we were ushered through the velvet ropes past the hundred person deep line. Our booth had an overview of the dance floor and the drinks were flowing. We started talking to a gent wearing sunglasses over the side of the banquette. Despite the fact he was wearing sunglasses in a night club, we invited him into our cordoned off area. After a while, the conversation turned down a dark alley and he got way out of line. We couldn’t get rid of him fast enough. Eventually, sensing our discomfort, one of our ballsier friends asked him to leave.

When our personal bouncer, Chuck, got wind of this, he told us if anything like that were to happen again, let him know and he would take care of it for us. That’s his job, after all. Wow! A big man to get rid of loser guys–what a dream!

That was, until we let the power go to our head. As guys approached our banquette, we just had to give Chuck a slight shake of our head and he would tell the guy to scram. Well, do this a few times and no guy is going to come talk to you, no matter how self important you are. We ended up having to leave our little booth in the sky to go trolling for guys around the club.

The lesson: Security is important for politicos and Angelina and Brad. Not so important for D-listers or a group of capable women in a club!

By the way, the Light Nightclub at the Bellagio is now closed. It was remodeled and is now called The Bank. It’s only been open two months. If you go, let us know how it is!

Fringe Is (Still) In

When we were in Charleston last month, Heidi picked up some peep toe cut-out booties…

The countdown is on to Sunday’s big game, a re-match of 2008 when the Giants…

If I ever end up on Hoarders, it will be because of my pink lip…

Do women ever grow out of playing with their hair? We think not and were…

On Our Radar: Portland and the World Domination Summit

We’re on our way to Portland (Oregon that is, because everyone asks) for the World…

Wolverine: The Best Date Movie Ever

X-Men Origins: Wolverine opened this weekend and we were on the fence about seeing it;…