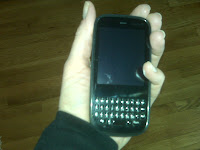 We’ve been testing the Palm Pixi since the beginning of the year.  Normally, we use a Blackberry which works well for our purposes: email, web surfing, occasional web publishing, twitter, and facebook.

The Palm Pixi is more user friendly and mimics the behavior of the iPhone.  Here are some of our findings:

Our favorite feature is that the Pixi works great as a multi-tasker: you can talk, text, and surf the web at the same time.   A real life scenario might be you’re talking to someone and need a phone number to a restaurant so you pull up the browser and search for the number; or you’re in the middle of sending a tweet and someone calls.  You don’t have to shut down one application to use another, in fact you can have several open at once.

The Pixi has an MP3 player that’s compatible with iTunes so we downloaded our music and even our playlists to the phone.  We haven’t had a problem running down the battery while listening to tunes either, so the battery life is good.

Conversations are listed by the person not the date, making it easier to track an ongoing “discussion.”

The Pixi has buttons and a touch screen (our Blackberries have only buttons, iPhones only have a touchscreen).  We use the buttons when we’re texting or writing emails and use the touch screens when we’re moving between screens or browsing the web.

The Pixi has a good camera with a flash.  We can upload pictures to twitter and facebook or send them in an email.

Lastly, the Pixi is smaller and sleeker than the Blackberry or the iPhone and much lighter than a Blackberry.   The Pixi’s keyboard may be too small for a man’s big fingers; but it works well in our hands.

All together, it’s been a good multi-tasking phone, so much so that we’ve extended our first month of promotional use and have added it to our phone plan.  The Palm Pixi is available at Sprint for $99 after rebate and service agreement.

This review was based on a sample phone provided gratis to The Jet Set Girls.

Lauren Bush and Feed are having a busy fall. The Feed/Read Bags should be available…

We hate it when our bra straps show; except for when we intend to give a…

Days of the Week Underwear

There’s something so kitschy about these Stella McCartney days of the week underwear, we just…

Lingerie is always a great holiday gift idea and so are designer goods, that’s not…

Last year we had a great time with the Sephora Favorites mascara sampler; but this season…

We can’t wait to hit South Beach, especially because the W South Beach is opening…

What’s a bachelorette party without a little frosting? This Champagne Cake from NYC hotspot Abe…

The other day I had the opportunity to chat with George Kotsiopoulos, co-host of the Fashion…

Free Wi-Fi for the Holidays

Typically on Thanksgiving I head south to see my mom in Alabama. As you might…