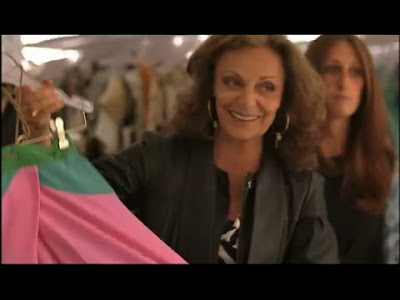 We know, we know. There are hundreds of reasons to watch the Oscars from seeing who is going to dress Kiera, Reese and Drew, how crazy Johnny Depp’s tux is going to be this year to who will actually take home the big awards (our money is on There Will Be Blood). But here’s a reason not to run out for more ice or Cab Sav during the commercials (or at least if you do, push pause on your DVR)—the new Diane Von Furstenberg commercial for American Express.
We love, love, love DVF, an original jet set girl herself. Not only does she make some of the sexiest and most flattering clothes around (though we’re still not quite sure if the blue dress we bought last year was not in fact a top. Whatever—it worked in Vegas!), was disco fabulous as a Studio 54 fixture back in the day, but we once ran into her shopping her own sample sale where she gave us fashion advice—swoon!
Her commercial was shot by Bennet Miller the director of Capote and the print ads were shot by Annie Liebowitz. The commercial follows her around her home and design studio. We’re still cracking up over the Ellen DeGeneres commercial where her raccoon makeup artist gives her raccoon eyes, not to mention the Robert DeNiro commercial about NYC which brings tears to our eyes. Can’t wait to see what the Queen of the wrap dress comes up with!

Do women ever grow out of playing with their hair? We think not and were…

New York City Waterfalls: Much Hoopla About Nothing

We loved Christo’s Gates in Central Park a few years back in ’05. Damn, we…

Give the Gift of Spice

We all have a girlfriend who still wears boxers and old t-shirts to bed. You…

Want to know how Obama rolls? Check out National Geographic’s On Board Air Force One,…

What to Wear on a Beach Vacation

Today’s guest post comes to us from Jacey Duprie of Singer22.com. Calling all trendy travelers!!!…

Mykonos, Greece Find out the best wet and wild pools and beaches from around the…

Just when you thought the holidays were over, Saks Fifth Avenue is in the…