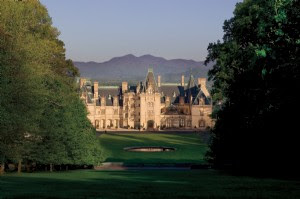 Tomorrow morning we’re headed to one of those cities that we’ve been wanting to go to for years, Asheville, North Carolina. (Like Austin, we’re sure it won’t disappoint.) We’re meeting our mom there for a Mother’s Day girls’ getaway.

Nestled in the Blue Ridge Mountains, Asheville first caught our eye after being named a top destination by Southern Living for several years running. The town was founded in the 1700s, then truly came to prominence after the Vanderbilts built their vacation home there, The Biltmore, in 1895 (shown above). At 250 rooms, it almost puts their other family vacation home, The Breakers, in Newport, Rhode Island, to shame. We’ll be touring the grounds and house on Sunday where we’ll get to see the Festival of Flowers–we’re told the azaleas are in all their spectacular glory right now.

The downtown area has gorgeous art deco buildings, plenty of shopping, from chic boutiques to art galleries to craft fairs, and food that rivals New Orleans for the crown of best in the South.

We’ll be staying at the newly opened Grand Bohemian Asheville (below) where mom and I will take part in the hotel’s “Girlfriend Getaway” package. Included in the package is a spa treatment, a cocktail at the Red Stag Grill and tickets to the Biltmore. We’ll also be eating dinner at the Red Stag on Sunday night to celebrate Mom’s Day. 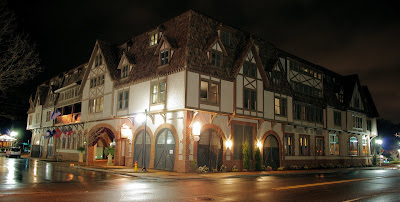 Also on the itinerary is lunch at Laurey’s Catering and Gourmet-to-Go. We hear that Laurey is more than an amazing chef, she just got back to town after a cross country bicycle tour to raise money for ovarian cancer. We’re looking forward to meeting her! Saturday night’s dinner is at The Corner Kitchen. (Yes, we love to eat!) Check back next week to see how our trip was!

The Twilight Saga’s third installment, Eclipse, was released yesterday and to my surprise this was the…

Can you believe it’s May? Neither can we. Especially because that means Memorial Day Weekend…

Bluefly, an on-line link to couture at cut rate prices, is launching a contemporary, casual…

On Our Radar: The Inn and Spa at Loretto, Sante Fe

For the past few years, we’ve taken the easy route and spent our winter…

Give a Helping Hand

JSG has been known to overindulge on rare occasion (wink, wink), so we love products…

Thanks to my diligent skincare routine while I was pregnant, I didn’t have develop any…

Turns out Maria Sharpova isn’t the only designer playing in the U.S. Open. Venus Williams…

When you move across state lines and have your second baby the next day, not…