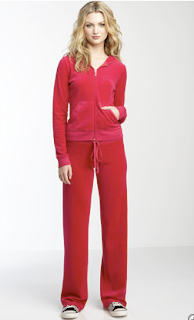 Just when we thought the trend of flying in velour track suits had happily become a distant memory, WWD reports that Juicy Couture plans on opening up stores in four airports around the world. Miami International Airport will get hit first with a store opening this month, followed by British Airways terminal at New York’s JFK. Next up on the Juicy hit list are Taiwan and Athens. We do admit, the “Choose Miami” T-shirt does sound pretty cute and we like the insider-y aspect of only being able to get the top at one store. Just promise us you won’t get on a plane looking like a Crayola crayon!

Get Pink’s Look at the Grammys

As per use, Pink killed it with her awards show performance an acrobatic rendition of…

On Our Radar: W Paris

Ready for your next pair of jeans? Stiletto Jungle has some denim for your consideration….

How to Help Haiti

How to Do a Smokey Eye

Bikini or One Piece?

After the movie and our RPattz sighting with Amber and Dina. Until last night, I…

Maya Brenner, known for her state necklaces, recently expanded her jewelry collection to include a…