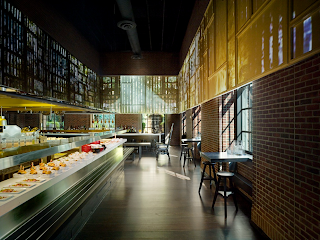 Last week, we had the pleasure of dining at Hudson Hall in the revamped Hudson Cafeteria space at New York’s Hudson Hotel. The restaurant looks pretty similar to the former Cafeteria, with some communal tables and the same dark wood goth chairs. It's pioneering "modern collegiate mess hall" chic, meaning the food is served old school cafeteria style with self service trays and food options. Lemon drop shots and woo woos are on the menu, hearkening back to the frat parties we went to back in the day.  But that's where the similarities to college end.

The menu, which changes daily, features items like tuna tartar, heirloom spinach salad, Waygu beef sliders, Chilean sea bass and artisinal pizzas. For dessert, there's fresh fruit (cherries on the night we were there), peanut butter pudding and cheesecake. Dorm food was never like this!

There's a video installation (a giant sized TV broken down into sections). Though we're told it's not intended to be a sports bar, the NBA Final game between L.A. and Boston was on the night we were there and we heard that the hotel's many European guests have been watching the World Cup.

Vegas: How to Have the Best Time!

We followed Samara’s adventures in Vegas on Twitter; but that was just a tease. We…

Who doesn’t struggle with figuring out what 3 Fl. Oz. product to take on the…

While Gwyneth does look breathtaking on the cover of the July issue of Bazaar, we…

Best and Worst Looks from the Billboard Awards

Did you tune into last night’s Billboard Awards? We caught the opening number of Britney…

Off Our Radar: Let Boys Be Boys

The other day we were at a local sports bar with our significant other. We…

Rachel Zoe kinda reminds us of an overgrown, slightly sun damaged Olson twin, but we…

Turns out Maria Sharpova isn’t the only designer playing in the U.S. Open. Venus Williams…