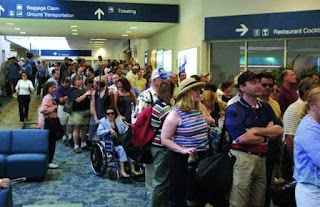 It’s no secret that airplane travel has lost its luster over the course of the past decade, if not years earlier. A new USA Today/Gallop poll found that 27 percent of those surveyed said it has gotten so bad, they would prefer to travel by train or car. For short trips, we agree. We can’t remember the last time we flew between N.Y.C. and D.C. Just this past weekend, Annie took Amtrak on that route. The three hour ride with no long security lines, no pausing to take off shoes, dragging the laptop out of bag and and no limits on liquids, is far preferable to the 30 minute flight. That flight used to be faster, but with all the hassles of getting to and through the airport and the possibility of weather delays, it’s just not worth it anymore.

What would we like to see the airports and airlines improve?

Today kicks off our annual Beach Week where we feature ideas for fabulous beach vacations….

We just got back from seeing New Moon and loved every minute! We couldn’t help…

On Our Radar: Paradisus Cancun

As I’m sitting in my office watching the snow come down, I can’t imagine anywhere…

My Night With Teddy Charles

So far, I’ve managed to resist bringing home expensive shampoos from the salon. I do…

We’re still trying to figure out what we’re doing for the big day, but we…

How to Help Japan Earthquake/Tsunami Victims

The news coming out of Japan keeps getting worse: the death toll is expected to…