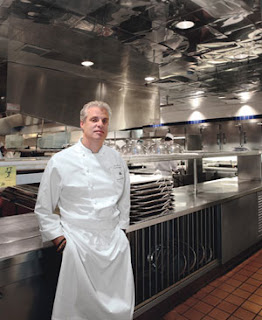 Between the Woodstock-themed fashion story that features Dree Hemingway and Jennifer Jason Leigh and the shots of cover girl, Kate Moss, be sure not to miss the one-pager on Eric Ripert in the September issue of W. Eric is the sexy chef of NYC’s Le Bernadin and Blue in Grand Cayman–and come fall he’s the star of PBS’s Avec Eric. He’s a chef’s chef and the show takes a behind the scene look in his kitchens. Each episode ends with Eric preparing what W calls, “a masterly, but manageable dish in a home kitchen.” We’re dubious about that last part, but our DVR is set!

A Peek Inside Their Carry On: Keep Me’s Ali Kay and Anne des Barres

The Band Perry and Schick

On Our Radar: The Thompson LES

We picked the Thompson LES for a quick overnight stay last month. Its location around…

Back when I was in my 20s, I was obsessed with anti-aging. I would spend…

On Our Radar: (Vicky Cristina) Barcelona

We haven’t returned to Barcelona since college when we went to see the Olympics. While…

No–we’re not talking about Leprechauns. As it’s St. Paddy’s Day, we decided it was a…

Coupons Texted to Your Phone in New York City

We’re already addicted to the new 8coupons.com service, which we just read about it today…

We want to hear what you have to say!!! To encourage comments, we are giving…