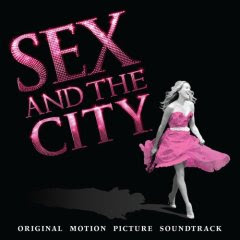 We’ve read a lot about the fashion and the locations of the upcoming SATC movie—and here we are, excited about the soundtrack. We are still clinging to one of our New Year’s Resolutions to do a better job of making more playlists. Obviously we’re lazy since the resolution about taking the stairs all the time fell by the wayside month ago, so that’s part of the reason we love soundtracks—they’re a ready made mix cd.

The soundtrack to the movie is released May 27—three days before the movie and…well, we’re not crazy about the original songs. Fergie’s Labels or Love has a fun sampling of the SATC theme song and will stick in your head if you’re not careful kinda like all of Fergie’s greatest hits (Glamorous anyone?). J. Hud’s All Dressed in Your Love leaves a lot to be desired, especially coming from a former Dreamgirl.

We are eternal suckers for a good remix, so we love India.aire’s Heart of the Matter and the Bird and the Bee cover or How Deep is Your Love.

POTENTIAL PLOT SPOILER…
For those looking for a clue to the plot lines: Auld Lang Syne is number 10 on the playlist. Should we look for a big New Year’s Eve ending a la When Harry Met Sally? The penultimate song is Al Green’s How Do You Mend A Broken Heart and the final song…Walk This Way by Run DMC. Hmmm…Does Carrie end up single?

Now that the Oscar’s are over, what movie should you see? Start with these 10…

On a quick trip through CVS, we couldn’t help but pick up a bottle of…

Men are from Mars

Truth is we never read that book, figured we knew men do everything backwards, or,…

Right about now, we’re dreaming about anywhere and everywhere that has palm trees and cocktails…

Kim Kardashian celebrated her bachelorette party this weekend at Tao Las Vegas with her sisters,…

Whether your single, dating, or part of a couple, one thing we can probably all…