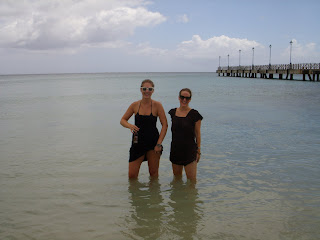 After being ridiculously fortunate enough to visit not one, but two Caribbean islands this month, one of the questions I’ve been asked a lot is which island I liked better, Grand Cayman or Barbados. It’s hard to compare the two islands, because the trips were so different: I went to Grand Cayman with my girlfriends and stayed in swank hotel and was in Barbados on a press trip with a mix of folks, including the delightful Barbara (above left, with me) and stayed in a not so great hotel. But here goes:

From what I experienced, Barbados is a bigger (166 square miles to Grand Cayman’s 76), prettier island with more going on culturally. It has a long history as a producer of sugar cane and rum, notably Mount Gay Rum. Virtually everywhere you go, you’re offered a cup of rum punch, no matter what time of day it is. I suggest you drink it–I never was a rum punch fan, up until this trip, but it’s tasty stuff when done the Bajan way. 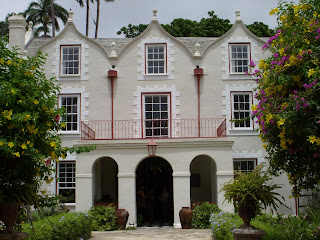 That history transfers over into many sweet little homes and museums. My favorite was the St. Nicholas Abbey (above), one of the oldest surviving sugar plantations on the island, dating back to 1650. Be sure to visit the loo to sit on an original Thomas Crapper. 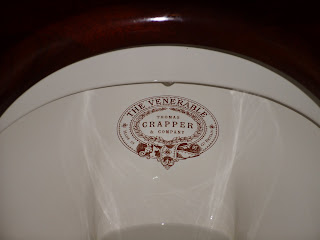 And, being a native Virginian, I appreciated the George Washington House, perhaps more than others. George visited the island with his older brother Lawrence, who was suffering from tuberculosis. By all accounts, the young George was molded by his trip here, learning about the military, agriculture and perhaps having his own Thomas Jefferson moment with the local ladies, if the unintentionally amusing, over-acted film shown at the house is to be believed. 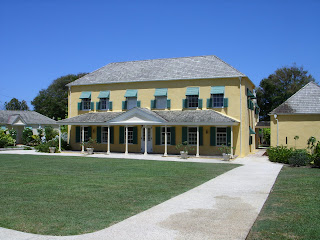 While I’m not a fan of gardens in general (I joke that living in NYC, the only thing I know less about than plants, is cars), a trip to Hunte’s Gardens is well worth the detour. One of the commenters on the garden’s website put it best: “It is like entering a dream, a fairy tale. Before you know, your heart is filled with joy, and you almost expect to see a flying fairy behind next bend of the path.” I couldn’t put it better. I would only add to it that one should be sure to leave plenty of time to visit the well appointed home and chat with the adorable Anthony Hunte and ask him to share his stories about everything from growing up on the island to entertaining Helen Mirren. That’s me and Anthony, below. We hit it off pretty well, as the photo attests. 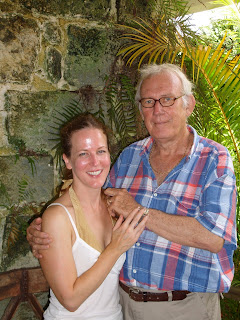 Is it worth skipping a day at the beach to check out these sites? I say yes, if only to see more of the island than you would from your cabana. I would also recommend it on day 3 or 4 of your trip when maybe you’ve had a little too much sun. You will need to rent a car or hire a driver to get to St. Nicholas Abbey, George Washington House or Hunte’s Gardens, so be sure to figure that into your budget.

Check back tomorrow to learn more about nightlife, restaurants and hotels in Barbados.
Read Part 2 of Annie’s adventures in Barbados.

Happy birthday, Emily Elizabeth, and thanks for celebrating with us! We love the Good…

Here’s a little something that should be in everyone’s carry on: the Ms. and Mrs….

How great is JLo looking just four months from having twins? She’s in Europe now…

A Peek Inside the StoreAdore Girls Carry On

A friend of JSG’s recently returned from a trip to Dubai. His report: It’s not…

Staying Fit and Healthy on the Road

We recently chatted with Ruth Zukerman, co-Founder of Flywheel Sports, about her strategies for staying…

We’re gearing up for the next movie installment of Sex and the City this summer. …

Here’s a cocktail we can really get behind.  This month in celebration of the 40th…