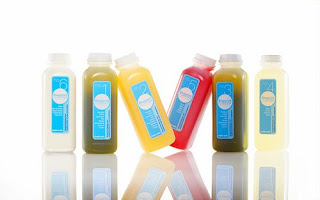 Yes, I was hungry. Yes, I cheated. And yes, I felt fine—better than fine even. I felt pretty damn good the entire time I was on the cleanse and now for the three days I’ve been off of it. I lost three pounds.

Those are the answers to the four questions I was asked most frequently when I told people I was doing the three day Blueprint Cleanse. For those who haven’t read Friday’s post, BPC delivers 3 days worth of juices to your home. The 6 daily juices are numbered so you know what order to drink them in and packed in adorable, individual coolers. It couldn’t get any simpler.

I signed up for the program to mix things up and have a fresh start for spring, which according to the calendar (if not the actual temperature here in NYC) started that same day.

I was most definitely hungry throughout all three days—I wasn’t starving to the point I wanted to chew my own arm off, but I definitely wanted more. And on day 2, I indulged in an apple and some almonds. Day 3, I graduated to an apple, almonds and some tortilla chips. Day 3 may have been my own fault. I took my favorite Sunday morning gym class, Phys Ed (a mix of body sculpting and cardio) at Equinox. The class was probably too intense for someone who hadn’t eaten (much) solid food in over 48 hours, hence the tortilla chips. To be fair, the BPC website recommends a vacation from hardcore workouts while juicing. They do also allow cheats like celery sticks, ¼ an avocado and vegetable broth. (Tortilla chips are surprisingly not on the approved list.)

I enjoyed drinking the juices. The morning “green salad in a bottle” blend of kale, spinach, cucumber, lemon and apple was a little hard to take first thing in the morning, so on day 2 and 3 I had a cup of chamomile tea first (allowed and recommended). The pineapple mint was delicious. The spicy lemonade (a la the Master Cleanse) was the one I most feared drinking and it turned out to be surprisingly tasty. The beet carrot juice was very earthy and always made me feel fantastic. The cashew vanilla smoothie was, um, not my fave. I experimented with heating it up, adding more cinnamon and pouring it in my favorite mug, but the chunkiness was a turn off.

My energy levels were sky high the first two days. I was ultra productive and managed to not only get myself organized, but also set some goals for the coming months. I was clear headed and on fire. Day 3—post my am workout and tortilla chip snack, not so much. I was actually really sleepy after I ate solid food. I’m guessing all my blood rushed to my stomach.

Now that I’m a few days off the cleanse, I’m feeling good—above average–and eating better. My appetite is lower than usual, I’m determined to stay away from candy and white bread. Most amazingly, I’m ok without my morning cup of coffee. Caffeine has not crossed my lips since Thursday. I haven’t had a single headache and I’m not even craving it.

My advice for those considering the Blueprint Cleanse who haven’t juiced before: If you haven’t juiced before, start with the one-day program. The first day was the most manageable for me. I already saw the benefits of a flatter stomach and increased energy after one day. If you opt for a 3 day or longer program, don’t beat yourself up. Even after I cheated, I still felt really good and healthy when I drank the next juice.

Any other questions? Feel free to ask!
A big thanks to all those who supported me via Twitter especially CasaNaranja, SETinNYC and ButterflyDiary!

Pain Relief on the Go

We were feeling a little perplexed about our blush as of late, especially on our…

Put On Some Makeup–It’s Good for You!

We exercise, eat right, and take vitamins (well, at least we try to); but we…

We hate it when our bra straps show; except for when we intend to give a…

Sandra Bullock at the Oscars: Get the Look

Best Actress Sandra Bullock was styled by Abergel for Fekkai who wanted to bring back simplicity, with…

A Few of My New Summer Must-Haves

If you were a fan of last season’s Mad Men Collection for Banana Republic, you’ll…