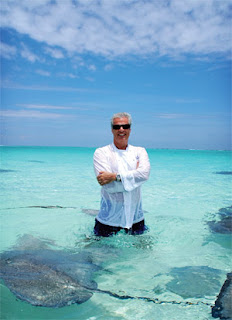 Usually on our girls’ trips we head straight to the nearest steakhouse to find the boys. But on our trip to Grand Cayman, we were celebrating Annie’s Birthday so we decided to treat ourselves with an OTT, decadent dinner at Blue by Eric Ripert at the Ritz Carlton, where we were staying. 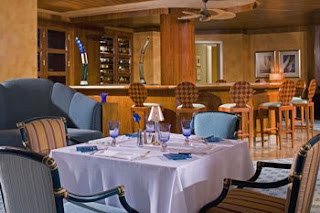 Eric Ripert is the yummalicious chef of New York’s Le Bernardin. We were tickled to hear Eric hangs out at Calico Jack’s when he’s in Cayman, just like us. Le Bernardin is consistently one of the top rated restaurants in NYC. Having dined there before, we had an inkling of what to expect–fresh seafood with unexpected twists like lobster with curry and tuna with foie gras.

We decided to sample the “Blue” tasting menu, which features local specialities, over the “Classic Tasting Menu” that is the exact same in NYC. We may go to the same restaurants as we would at home, but we do want to be at least a little adventurous.

The chef generously contributed four or five extra courses (we lost count), so by the time we were done, we had each eaten enough to feed a family of four. Our favorites were the tuna–it was so meaty and peppery it could have been a steak; the scallop that was an extra and the warm chocolate cake that was so beyond delicious and yummy inside, it was essentially a soufflé.

Suffice it to say the next night, we skipped dinner in favor of cocktails!

Prince is playing the L.A. Forum for 21 days—and many tickets are just $25! (Standard…

A Peek Inside Leah Ketcham’s Carry On Bag

I have to admit, I am a full on seltzer addict. I will easily drink…

A New Treatment for Sensitive Teeth

U.S. Olympic skier, Lindsey Vonn, is on top of the world, or mountain in her…

Just when you thought the holidays were over, Saks Fifth Avenue is in the…