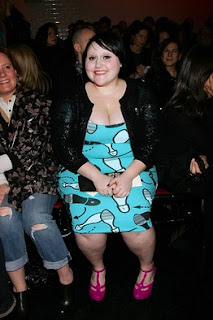 We’re a little slow on the uptake of this one–you know it’s bad when the Wall Street Journal beats you to finding a band. Oh well. Better late than never. As WSJ rightly pointed out last month, Beth Ditto, lead singer of The Gossip is fashion’s latest flavor. WWD reported that even notoriously blasé D.J. Leigh Lezark practically gushed over Beth’s performance in her skivvies at the Nina Ricci after-party during Paris Fashion Week.

What makes Beth so cool, aside from her killer voice? She’s a self-described fat, feminist, lesbian from Arkansas. Here are a few of her bad ass quotes from Wikipedia, which we find particularly endearing:

“Women aren’t cats, we aren’t pets, we are just people trying to cross the freaking street to get an ice-cream.”

Of her hit song, “Standing in the Way of Control,” written during the Bush administration, in response to its stand against gay marriage:
“I wrote the chorus to try and encourage people not to give up. It’s a scary time for civil rights, but I really believe the only way to survive is to stick together and keep fighting.”

We’re sure Beth is thrilled with what happened in Iowa last week and Vermont yesterday. (JSG is happy, too!)

Download her song now–it’s perf for your next road trip!

On Our Radar: Vdara Las Vegas

This time last year, we were in Vegas celebrating Anne’s bachelorette party and since then,…

Bobbi Brown announced Katie Holmes as the first ever celebrity face for her collection. While…

We went to the Altru Event last week, hosted by Manuela Testolini, the Founder and…

Get Sofia Vergara’s Look from the Golden Globes

Anyone can have a pro looking blowout with this cool tool: the Body Up Pro…

We’ve always recommended the hotel concierge as a fantastic resource on your vacation. They can…

We loved Jessica Chastain‘s look at the 2012 Academy Awards. Read below to see how…

A Peek Inside Shoshanna’s Carry On

We recently had the opportunity to talk with one of our fave designers, Shoshanna Gruss…

Surf, Baby! from MAC is a beach party in your makeup bag with the new…