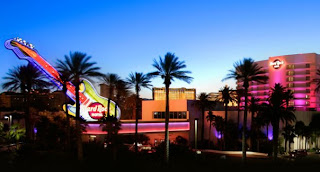 One of the questions we always ask ourselves when trying to decide which hotel to stay at in Vegas is: Is such and such hotel too young? While we adore our 20-something friends, we’re not so crazy about partying with someone who looks like they may have a fake ID. Our days of doing consecutive tequila shots are long behind us; but if that’s what you’re into, this post is for you.

The first time we went to Vegas, we stayed at the Hard Rock Hotel. The pluses: The Beach Club, with real sand and one of the best pools in Vegas. You can eat at Nobu without ever having to step outside (yes, we can eat at Nobu at home, but black miso cod is a favorite in any city). The concert venue The Joint re-opened this April at twice the size–Kelly Clarkson and Creed are on the lineup this fall. The new Paradise Tower looks pretty swank and if we could stay in the Penthouse with its own personal bowling alley, we would book it faster than you can say, “double down.” 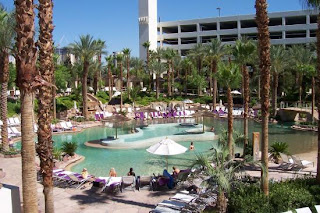 The downsides: It’s not right on the strip, so if you want to go anywhere, you’re in for a longer taxi ride. And aside from the Hard Rock store, a lingerie shop and a jeweler, there’s no shopping to speak of.

We stayed at The Palms for our friend Heidi’s bachelorette party. This was shortly after it opened, when Ghostbar was the place to go. Somehow or other, we were mistaken for VIP’s and got free use of the hotel’s green limo all weekend. We would love to go back to check out the Playboy Club and Moon, the 53rd-floor nightclub with a retractable roof and to stay in the Barbie Suite or Hugh Hefner Sky Villa. 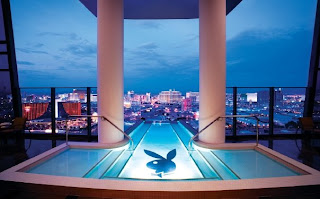 Like the Hard Rock, it has little going on in the way of shopping and it’s set off the strip. Maybe they’re trying to keep the youngsters away from the grown ups?

It’s rare that we would write about a body wash, but we had to make…

Kim Kardashian at the Airport

People Stylewatch posted another of our favorite slideshows, Stars’ Airport Style. Black was a predominate…

Like all of you, we were pretty taken with this photo of Brad Pitt from…

A Toast to Fashion Week

Fashion Week may be almost over, but that’s no reason to stop the party. (Indeed,…

On Our Radar: The Carlton Hotel NYC

On Wednesday night, we booked a double room at the The Carlton, a Preferred Hotel…

Summer’s almost here and that means one thing to us: It’s ponytail season! We don’t…

This sudden shock of warm weather has us scrambling to figure out what to wear….

Kimpton is taking the sting off of tax day with “1040 Menus” and “Deductible Cocktails.” …