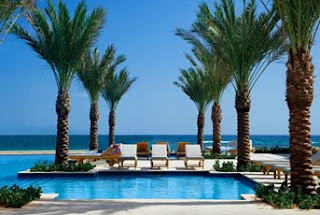 St. Maarten is another smart option for a Caribbean bachelorette party. Half the island is French, while the other half is Dutch. Those in the know dine on the French side and party on the Dutch. In true Dutch fashion, St. Maarten is known for its nightlife. Last time we were there, we stayed at the affordable Caravanserai Beach Resort. It was on the sketch side–it’s super close to the airport, so planes fly quite close and the beach is quite small. It does have a happening beach side bar, where we met the international crew of a yacht, including a flirtatious French man and a drunk Norwegian. That was all before hitting the clubs.

If you’re budget allows, you should upgrade to the Westin St. Maarten Dawn Beach Resort and Spa (shown above). It’s close enough to the nightlife, yet far enough removed to have a nicer beach and better rooms. As a Westin-you know it’s going to have amazing Heavenly Beds and a Heavenly Shower.

It can be cheaper to rent a car in St. Martin/St. Maarten than it is to take taxis. It’s always a bit of a drag to have to worry about drinking and driving on a trip, but if you have a responsible, sober friend, you’ll save a lot of money. It’s especially worth it if you do want to hit the French side for restaurants, like Le Bistro Nu or Sol e Luna.

The island is easy to get to with nonstop flights from the East Coast on American, Continental and Jet Blue.

While we were excited that the NYTimes wrote about the Miami Fountainebleau’s $500 million facelift,…

Hey, Chelsea! Ever thought about writing a travel guide? Between your hilarious retelling of your …

Would You Trust a Sunscreen You Drink?

“It” handbag designer, Rebecca Minkoff, is expanding her collection of cool girl things to include…

Get the Mally Glow – Review

I recently did something I never thought I would do the other day: contoured my…

Alas, the holidays are over, and we’re focusing on our warm weather getaways. If, like…

What would you do if you couldn’t find a great selection of shoes nearby? Kassie…