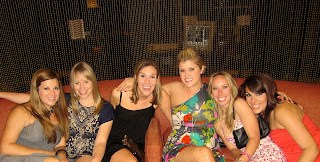 When starting to plan the bachelorette party for my friend, Abby, the only thing we knew is that we wanted it to also be a girls-only vacation.  We are all in our mid-twenties and either in a serious relationship or already married, so we rarely get to take a trip with just the girls.

We first looked at international options, like Mexico and Puerto Rico, but decided it’d be much easier, and more affordable to stay in the States, especially since we were only going for the weekend (Friday to Sunday).  Our main priorities were to visit a beach destination that was also known for its nightlife, so Miami was a no-brainer.

Next, we got to work on booking our travel.  Since there were only six of us (the bride, her sister/maid of honor, and four bridesmaids), and four of us were coming from the same place (Austin, TX), flights weren’t hard to organize.  The more difficult decision was choosing where to stay.  We knew we wanted to stay in a vacation rental home since many of us had done it before and understood the benefits of booking a beach house or condo instead of a hotel, particularly when you’re with a group and want to spend as much time together as possible.  The bride’s sister immediately turned to the web and used sites like VRBO.com and HomeAway.com to research our options.  Based on space, budget and location, we eventually chose Property 148433 from HomeAway.com.  The condo had two bedrooms and a large L-shaped couch, so there was plenty of room for everyone to sleep.  We could’ve opted for a larger property with more rooms, but since it was all girls, we were fine with sleeping in the common areas to save money for our nights on the town! The condo was about a five minute walk from Ocean Drive and was about $360/night or $60/person/night.

While most of us flew to Miami, one girl drove and picked up groceries for us ahead of time—everything from breakfast options and sandwich materials to chips and late-night snacks.  Having a stocked kitchen in our vacation rental saved us a lot of money on daytime meals, although we ate at restaurants for dinner each night.

Our property manager was a Miami native and also lived in the condo building where we were staying.  His younger brother, who was a club promoter, knew we were there for a bachelorette party and pointed us to the best places to go each night, and in some cases, even helped us get past the long lines!  They were extremely helpful and were a quick call away to answer any questions we had.  For example, one afternoon we were really in the mood for a Cuban snack called an “arepa” and they told us about a local spot called “Los Perros” that quickly satisfied our mid-day craving! YUM! 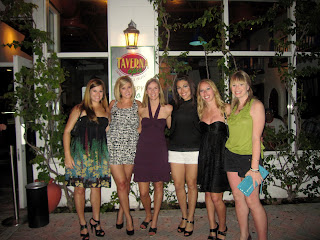 We spent our days lounging poolside at the condo or on the beach chatting and drinking cervezas.  Then at night, we sampled the local fare at restaurants like Joe’s Stone Crab and my personal favorite, Taverna Opa (NOTE: This is the BEST place to go if you’re at a bachelorette party in Miami—the DELICIOUS Greek food is served family style, but the meal is definitely not the main focus.  At a certain point during dinner service, they turn the music up, throw hundreds of napkins in the air and encourage all the ladies to dance on the tables!  It was our luck, that a bachelor party of about 20 boys were seated next to us, so we all began dancing on the tables together—just make sure you don’t go there too hungry since you don’t eat much!) 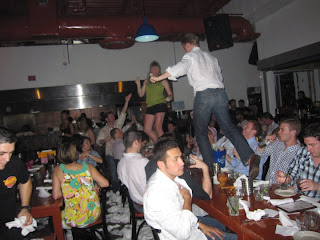 Being from Austin, TX, the biggest shocker for me was how late the bars stayed open.  In Miami, the party doesn’t stop until 5AM so we slept most of the morning in order to recuperate from the night before.  However, all in all, it was a great place to live it up and celebrate one of your best friend’s last few weeks as a single woman!

Musts for Checking In

We can’t wait to get to San Fran for BlogHer and check into our hotel,…

We’re always on the lookout for chic and effortless ways to style our hair, particularly…

The latest handbag collection, from the eternally chic Kate Moss recently launched at Longchamp. The…

The World Cup, South Africa, and the Cover of Vanity Fair

South Africa is high on our wish list of dream spots to visit; but we…

When asked about our best secret for packing, we always say: Limit your shoes. Now…

Summer and the beach mean one thing for our hair: It’s time to start amping…

Created with Admarket’s flickrSLiDR. We love shopping their gift stores, so it follows that seeing…

Admittedly, we’re probably the only ones watching the Victoria’s Secret Swim Videos to gawk at…

Go Commando: The New Way to Avoid a Panty Line

Do you go commando? One of us JSGs does, at least sometimes. You see, she…