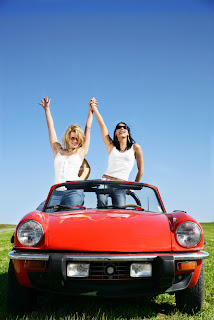 As one half of JSG lives in NYC, never drives and is happy to cab it everywhere and the other half lives in the suburbs and spends a quarter of her day behind the wheel, we always debate over the benefits of renting a car. It’s not rocket science, but it’s worth it if you’re in a city that’s spread out like L.A. and not in a city like Vegas where taxis and limos run like water (or is that bubbly in Sin City?) and you’re going to be buzzed 90 percent of the time anyways.

On last week’s trip to Phoenix/Scottsdale, when we realized it was only $10 day to rent a car and–Hello!–$25 a day for the convertible, we didn’t have to think twice. Driving with the top down from the airport to the hotel turned into an adventure instead of a queasy ride in the back of a taxi. We also got quite a few stares from our fellow drivers, but that may have been because it was 60 degrees and obvious that we were tourists desperate for sunshine. Regardless, it was so fun–we may just be car rental converts!

With temperatures today at 90 degrees and high humidity, it’s safe to say we’re in…

What’s a bachelorette party without a little frosting? This Champagne Cake from NYC hotspot Abe…

Flying Virgin America today through December 26? Pay attention to see if you’re on a…

Those of you under 30 are probably wondering what the heck I’m talking about. Those…

Last May, I had a Keratin treatment which smooths out your curls and eliminates frizz…

No doubt that the Oscars are the premier event for red carpet fashion watching; but…

Travel Friendly Beauty Products: An Interview with the Founder of AirRepair Skin Care

Although simply put, they are just scents, fragrances have distinct personalities and just like best…