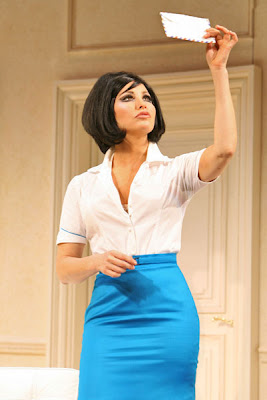 While half of us lives in NYC, she doesn’t often get to the theater much. For one thing, it’s pricey, many modern musicals leave much to be desired and she’s decidedly NOT a Clay Aiken fan. But after reading the reviews of Boeing-Boeing and hearing about its 6 Tony Nominations, we were inspired to walk the block from our Hell’s Kitchen pad to the Longacre Theater to buy tickets for the show.

The show, which features bitchy fave Christine Baranski, the Showgirls diva Gina Gershon and the West Wing‘s Bradley Whitford, revolves around one man, Bernard, who is engaged to three different stewardesses (It takes place in the 60s in Paris, so it’s okay to use the now non-PC term.).

The clip on the site is what convinced us it would be worth our while–it feels like a bawdy Carol Burnett show, which follows since Boeing-Boeing premiered in 1965.

We’re going on June 3, so check back then to see what we thought about it.

In the meantime, we’ll let you in on a little secret: Broadwaybox.com. It has all the discounts for every Broadway and off-Broadway show. It saved us about 40 bucks per seat!

Check back next week for our exclusive interview with the show’s makeup artist Erica Wheelan who will dish on how she recreated all those gorgeous 60s inspired looks–including Gina Gershon’s dramatic cat eyes shown above!

This is the time of year when, despite all our best efforts, our skin starts…

Jennifer Lopez’ Makeup at the “This Is It” Premiere

Jennifer Lopez looked gorgeous at the “This Is It” premiere. Celebrity makeup artist, Bebe Booth,…

What to Wear for New Year’s Eve

Still searching for the perfect New Year’s Eve dress? Thanks to the folks at New…

We’ve been curious about all the leather shorts popping up in the stores recently. They’re…

On Our Radar: BlogHer Conference in San Francisco

Next week you’ll find us in San Francisco for the annual BlogHer conference. We’re not…